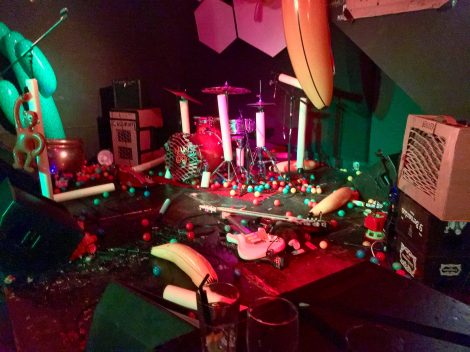 Over the last few months I’ve been helping out on Craig Bush‘s music video I’m Just a Robot for the band Gorillabot.

We both saw them for the first time at the launch of their EP Malware. This photo of the aftermath gives a flavour for the gig. It was like a demented kid’s party. The energy, comedy, mania, ideas and colours, made us want to make music videos for them straight away.

For Craig’s video he wanted to reproduce the feeling and aesthetic of that live performance, and use it tell one of the video’s stories as densely as possible. We both have a love of absurd humour and heightened reality, so it was also a good opportunity to push Gorillabot’s silliness to a new level.

So began weeks of Craig working with Art Director, Amy Holden, to fill up Craig’s house with a series of cardboard sets and props. At the same time I was building my own bridge to wear for a star cameo.

After a lot of pre-production, Craig was ready to move everything into Yamination Studios to prepare rigging, set dressing and rehersals. 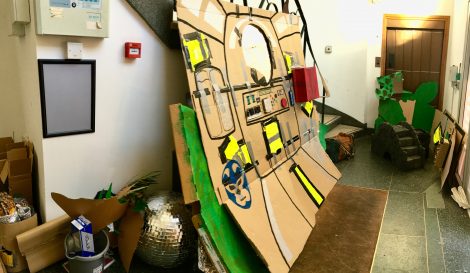 The shoot was loads of fun, or at least from what I saw it was. I spent most of the day alternating between wearing a globe and a bridge on my head. We also had a great cast of friends and regular collaborators filling out the video, so a huge thanks to them for dedicating their time. Similarly to all of the crew who helped everything run smoothly. I’m particularly impressed with how DP Paul McHale, and assistants Lewis Morgan and Liam Morgan worked together to capture everything and somehow keep it all in focus.

After that, it was down to the long hard post-production slog. While there are a lot of practical effects in the film, we wanted to digitally enhance them past what is physically possible in order to pull the rug from under the audience so that they felt like anything could happen. My way of thinking about the visuals in this film is that Benbot believes he’s a robot and that this whole scenario is a fantasy acting out in his mind in a basement somewhere. It’s childlike with sinister undertones.

Another role of the visual effects was to create a sense that the film was happening in one take. A lot of time was spent creating transitions that flowed well while trying not too hard to completely hide them. I’ve seen a lot of videos where they hide cuts perfectly, but as soon a seam appears it feels like you’ve seen behind the magic trick and it’s a little disappointing. I wanted to do a good job hiding cuts but I was more interested in making the audience want to go with the flow over seamless trickery.

Part of that was adding elements of interest in the more dramatic edit points. Loads of dust and smoke to make the scene more chaotic. Also the key to a good transition in these cases was to use elements before and after the two cuts so that it’s not totally clear what is being cut to and from.

Most of the transitions were largely a case of making the camera flow nicely. All it takes is for a slight camera jitter, then your eye catches it and you’re taken out of the flow.

As well as creating things that weren’t possible in real life I wanted to make the situation look like a health and safety nightmare. The whole film is about Benbot innocently trying to have fun but causing death and destruction without realising. Also, in the mid-point of any long music video it’s good to have lots of explosions and fire to keep the audience going.

It wasn’t planned for the solo to have extra sparks, but the reaction of the actors to Benbot lighting his one small sparkler was great and I wanted to make it look like they were in genuine danger.

There were more subtle elements that were added to help the flow. On the day some of the call and response sections from the crowd didn’t quite register visually. So I went into my vault of green screened characters from Gregory Is A Dancer and laid them into scene. Craig even managed to get his director cameo in the process. A lot of attention also went into the grading. We shot on RAW so I was able to correct the lighting frame by frame to make sure everybody was well exposed. The set ups were so quick moving and extreme that we couldn’t have planned to have even lighting everywhere so it was nice to have that element of control.

The last step was adding a ton of reactive lighting to create the sense of a live gig. The nature of the shoot meant we mostly had practical Kinoflow lights so it was nice to bring those to life at the end.

It was a really fun project to collaborate on and I’m looking forward to the next Gorillabot video. And of course I’m now available for any grumpy bridge character work going.