As you may or may not know, we’re making a new short film for Nickelodeon called Duckmanboy. And as with most short films, we need a cast. And now we can reveal it.

Please be introduced to Rasmus Hardiker as Dwayne, John-Henry Falle as Sir Richard Battenburger, and Mike Wozniak as Neil (flanked by Louis and me). 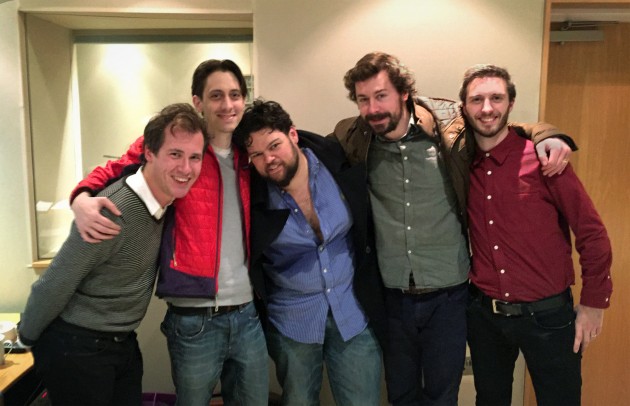 Rasmus is an actor and voice artist that has appeared in many sitcoms and animations. You might recognise him as Steve Coogan’s sidekick in Saxondale, or from his roles in sitcoms Lead Balloon, The Wrong Door and Funland (which I think is criminally overlooked). Rasmus is also an established voice talent and is soon to be appearing as not one, but two of the Traceys in the rebooted Thunderbirds Are Go series.

As a bonus, Rasmus is from our neck of the woods. He’s a Birmingham lad and it’s nice to have more Brummies portraying half man, half duck superheroes.

Mike is a stand-up comedian and actor. He was nominated for the Foster’s Edinburgh Comedy Award in 2013 for his live solo show. He is also a regular cast member of Channel 4 sitcom Man Down with Greg Davies and the late Rik Mayall. Mike has appeared with another former Dice collaborator Kevin Eldon in his BBC2 sketch show It’s Kevin.

He is often seen sporting a glorious moustache. 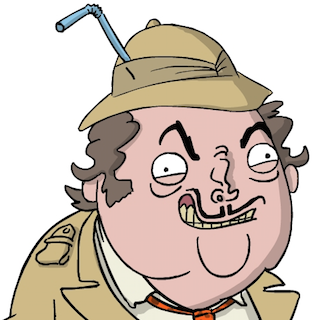 John-Henry is an actor and comedian who is one quarter of sketch group The Beta Males and 100% of The Story Beast, a character in the thrall of mythology and lore. We first met John-Henry at London Comedy Film Festival in 2013 when we as judges selected his film Womble in the top 3.

John-Henry has been seen in The Boy With Tape On His Face’s comedy pilot and is soon to feature in Bill, the Horrible Histories feature film. We urge his casting in many other things. He’s very good and a lovely chap.

And now, for anyone interested in the process of animation or filmmaking, I thought I’d talk about how we go about casting for a comedy short. It’s one of the most fun parts of the process for us alongside the voice recording itself.

We tend to start the casting process with quite specific ideas of people we know or have seen live or on TV. Recommendations also help from people in the biz.  Often, we’ve written the parts with people (or voices) in mind so that gives us a strong starting point.

When it comes to choosing people to audition it’s all about the voice and the character. Name, popularity, and look don’t come into it. If they’ve got the right voice and the comedy chops to interpret the script then they’re the right person for the role.

We particularly like working with comedians. We’ve been lucky to work with some great alternative comedy talent so far (Mayall, Eldon, Long, etc). Comedians have a natural sense of timing and can add to the performance in ways that some voice artists cannot. That’s not to say pro voice artists aren’t good. We’ve worked with some great ones and their versatility and range is the thing that marks them out as special. For this project, we thought comedians and comic actors were the way forward.

So after some head scratching and research we held the auditions at Nickelodeon’s London HQ and we saw some very talented people. We gave a 20 minute slot to each performer in the Spongebob room and did a recorded read-through of the script, with Louis and I filling in the other parts. It’s a testament to the skill of the actors to react to our terrible line-readings and fluffs.

We give a small amount of direction in auditions, but mainly want to see the performer’s interpretation of the material and their energy. Animation often requires quite big vocal performances and sometimes it can be difficult, even for actors, to break out of their shell and go nuts. Cartoons are often big, vivid worlds, so the voices and performances often have to be too. In this case, we wanted to mix big and wild, with some understatement and restraint.

After the audition we took the tapes away and listened to the takes, combined with the self-taped auditions that were sent to us by performers that couldn’t make it on the day.

Following some deliberation and thinking about the characters we had difficult decisions to make.  In the end we decided on our core cast of three based on their unique angle on the voices. The voices we’ve ended up with aren’t exactly what we initially thought, but that’s fine. We go into casting hoping to be surprised. Sometimes you can’t prescribe a voice to someone, you just have to hear it and decide from there if it fits the bill (duck pun intended).

Once the formalities of contracts and fees are sorted it’s onto the voice recording which hopefully I’ll talk a little bit about in another post. We’re really happy with our cast and the performances we’ve captured, and all that feeds into the next stage of production. Onwards!