About 3 years ago outside a coffee shop, Ian got some croissant on his face and a silly sketch popped out fully formed. The main challenge was how to attach structurally unstable croissants to a face. We asked Twitter and THE Bob Mortimer told us “copydex”. If sticking stuff to your face is good enough for them it’s good enough for us. After Croissant’s first screening we heard Bob had ‘fallen’ and underwent a triple bypass. Sorry it took 3 years to make Bob. 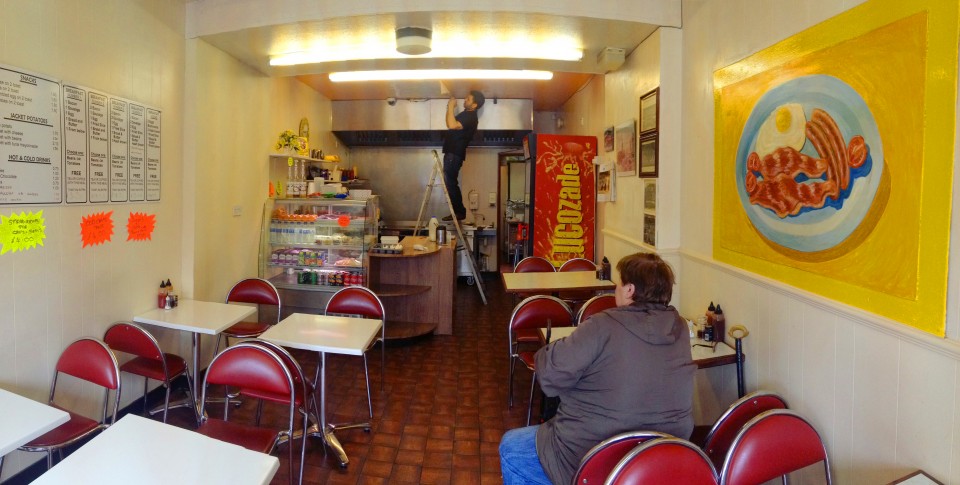 This summer we wanted a nice excuse to work with our clever mates and have something to show at a couple of festivals. We settled on Croissant, which at first felt more like a sketch, but there were so many weird elements to it that there was a reason we hadn’t braved it yet.

We feel that animation and live action should only be used when they’re most useful. It would have been easy to make a 2D cartoon, but that wouldn’t have had much impact beyond the amusing concept. The aim was to make the film purely funny in every aspect and have the audience feel the escalation is spontaneously happening right there. However that’s achieved through quite a technical way. The actors and their chemistry have to fit with the correct surrounding. There needs to be some sort of relationship subtext so that you can care about why they’re angry/confused. The transformations should look shoddy but believable.  The pastry levels have to increase in the right increments. The roaring torrent of jam has to be a punchline that can’t be topped (I would have liked more jam).

It felt like it should take place somewhere like a roadside cafe. Maybe because roadside cafe’s feel like strange limbos, but probably because we like greasy spoon cafes. As for actors, Tom Reid was always going to be our number one croissant. John Henry Falle was so impressive on DuckManBoy that we had to find a way to work with each other again. Together, Tom’s small performance versus John Henry’s jangly, booming  performance was brilliant to watch.

Next thing to work on was the Croissant head. After a while of painting and glazing, the smell of stale reference croissants started to make me think I had a painted an actual huge croissant. 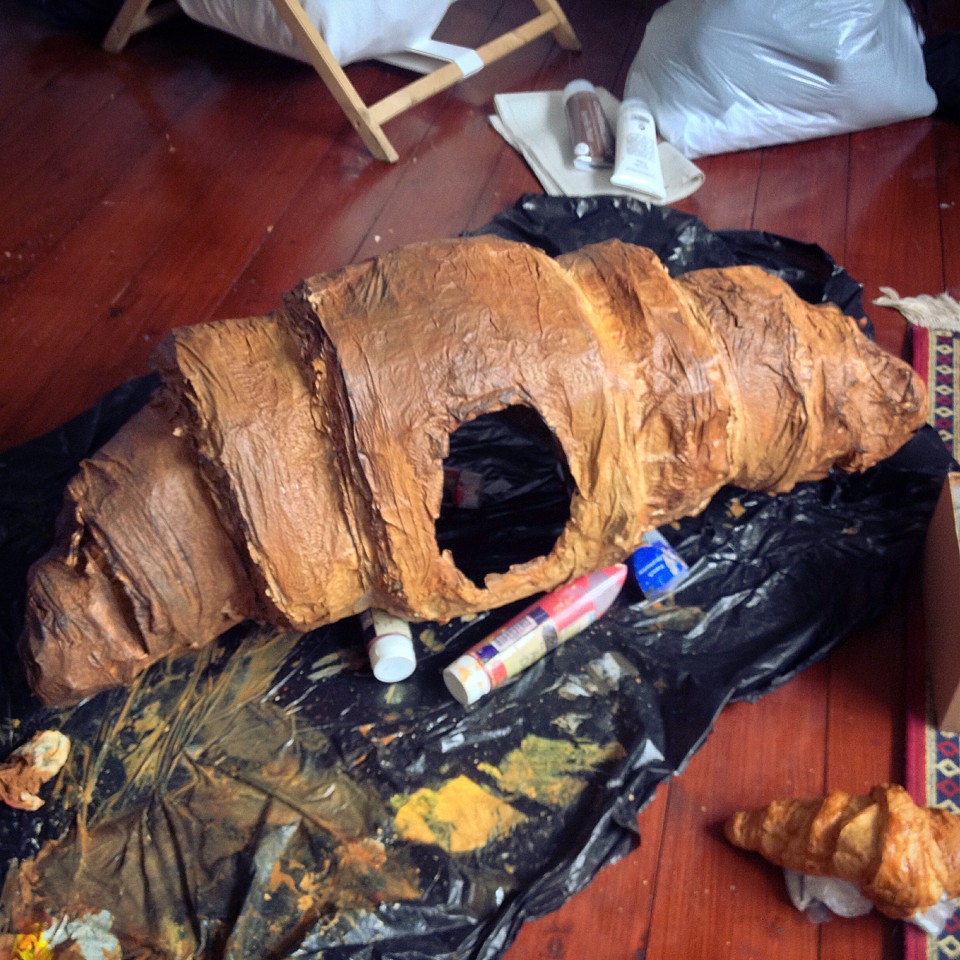 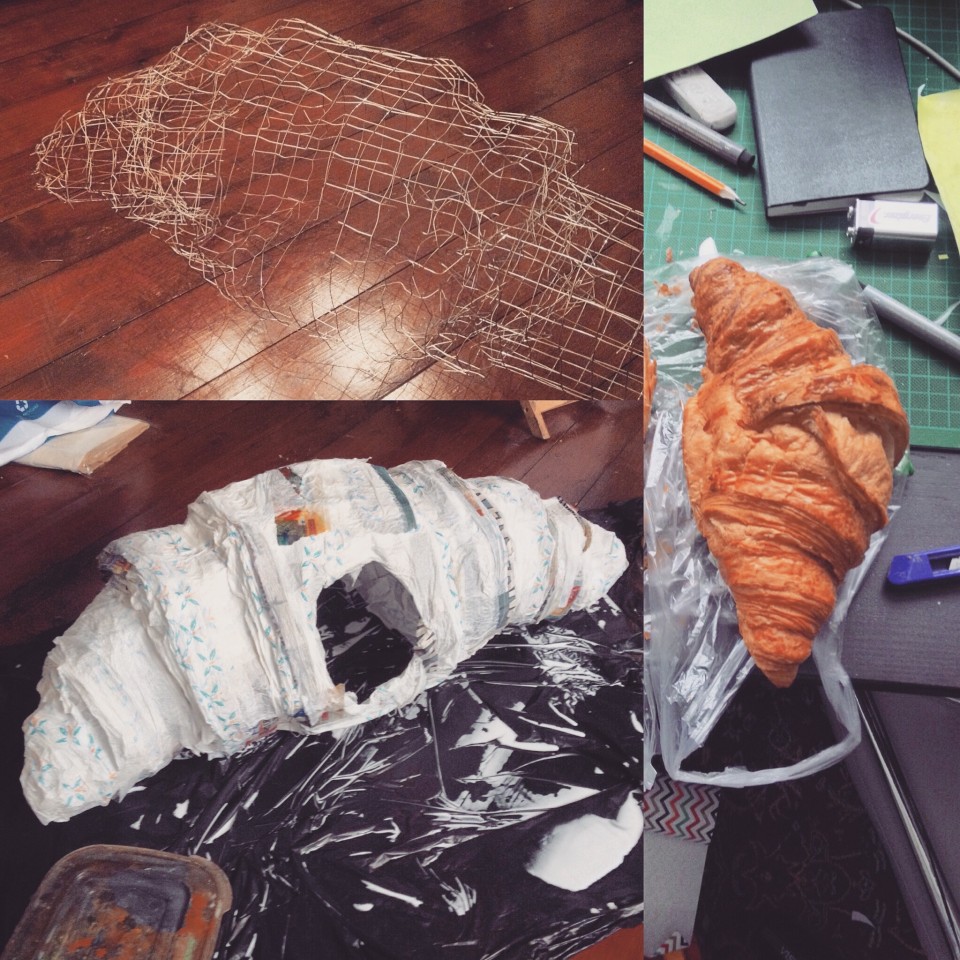 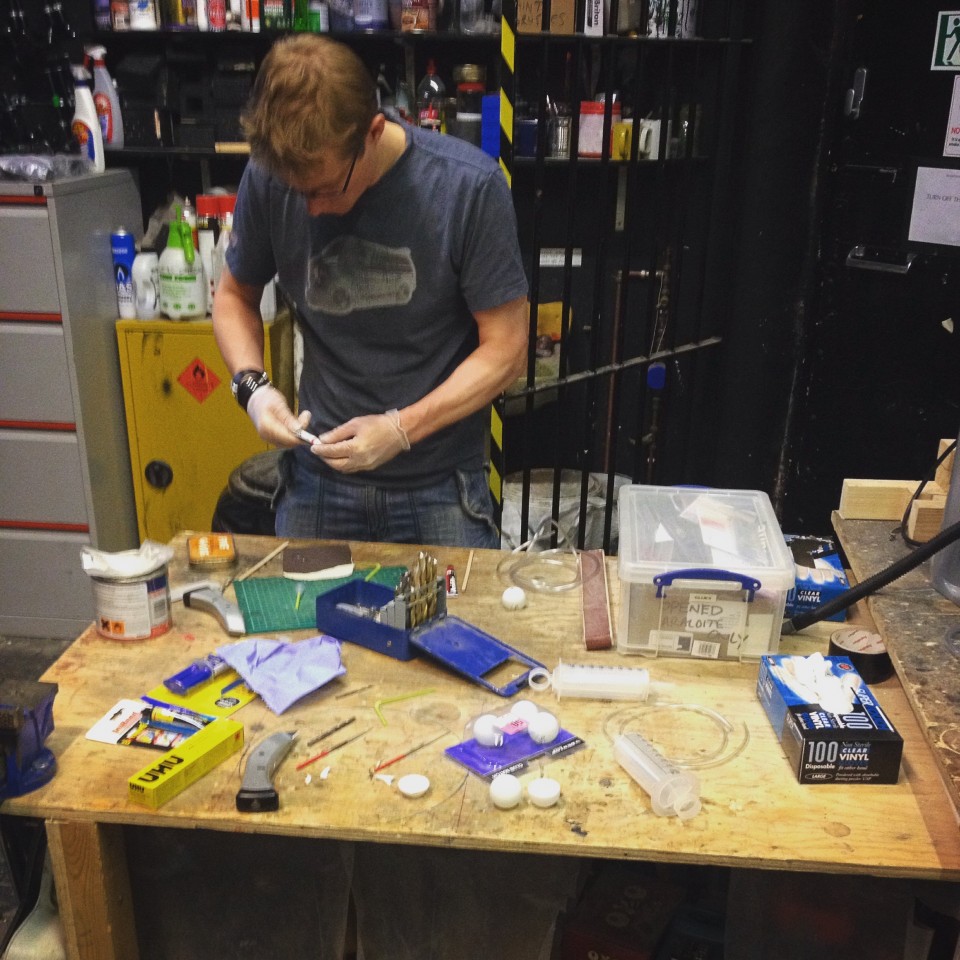 The squirty eyes were made under the wisdom of Chris Randall. I turned up with some pingpong balls, jumbo syringes, tubing and twelve jars of cheap jam. Chris immediately rolled up his sleeves. The first test was a thick jam fail. Cordial made a lot more sense and could wash out. We also got bonus Doctor advice to shorten the tubes for less resistance.

I enquired about a custom croissant handlebar moustache and eyebrows with a French patisserie, but realised it was easy enough to just bake/grill puff pastry to make sturdy but flakey facial hair.

In the script there was no specific dialogue or clear cut emotional ramp until the obvious big transformations. Capturing the spontaneity of the performance took priority so I threw out continuity in favour of building and layered the performance in the edit.  It took about 2 edits to realise this. Up to then, the performance felt consciously cut and snarky. Once the continuity was ruined it was quite freeing to do the ‘croissant choreography’ from scratch, even though this meant removing and adding croissant on most of Tom’s shots. It also meant I could really start experimenting with the rhythm of the edit. The emotional build up of the characters became much clearer too. John Henry’s nervousness is brewed up by Tom’s stupidity to the point where you can see why he would crack. It took a lot of time and we debated whether we should have done things differently, but the only way round would have been a day of rehearsals we didn’t have, or tons of retakes which might have killed the atmosphere. 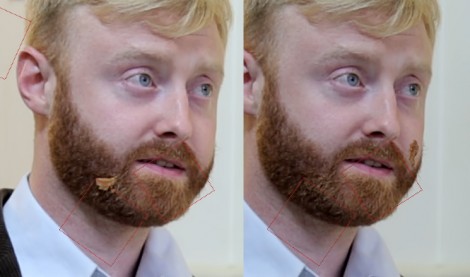 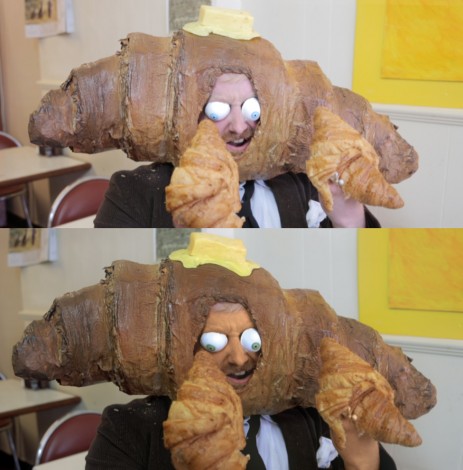 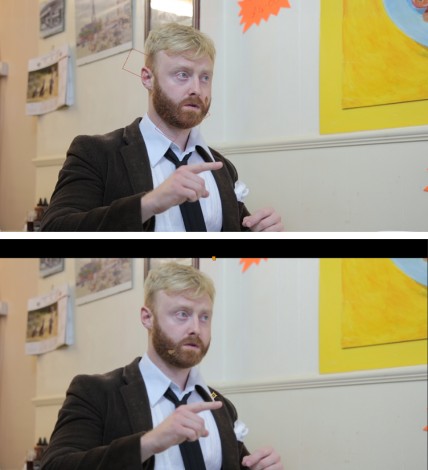 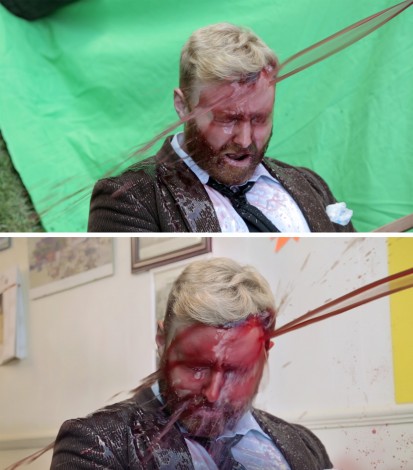 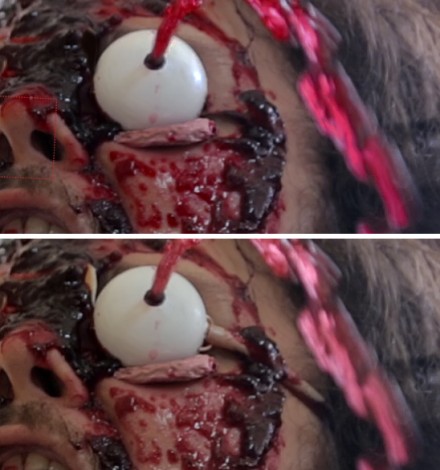 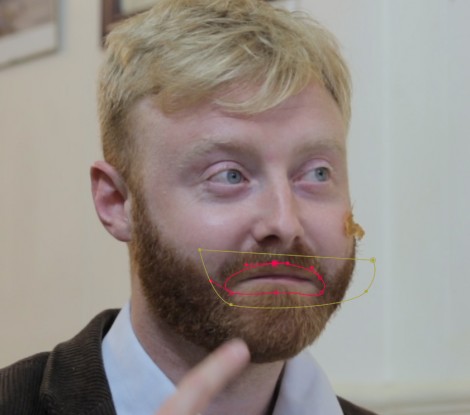 Craig’s framing on the shoot really captured Tom’s performance and built the tension, but all of my edit meddling lead to inconsistent framing. This meant that half the shots were reframed with tracked background plates. That sounds like an unnecessary amount of work, but it gave the scenes a flow by steadily pushing the camera back and forwards on Tom. By the time I’d gone this deep I went the whole way and fixed a couple of continuity errors, rubbed out jam tubes and rubber bands, painted Tom’s face, and made his butter fascinator melt.

Making a jam torrent that would smash into Tom without a ruining the cafe was another hurdle. Genius Chris Randall came to the rescue again. He had the idea of turning Tom on his back against a green screen and pouring jam from above to give the illusion of lots of gravity defying force. Otherwise we’d need to bodge together pressurised equipment full of jam. Buckets full of watery jam were a lot easier.

We had one of the nicest teams we could have had for filming in such a tight space.

We’ve done stuff with Craig Bush for a few years now. We share a lot of the same humour and he was the one that chose Croissant as the next film.

Pete Styles is a great sound designer and recordist and wehad wanted to work with him for a while. He’s one of the loveliest guys going, and since shooting this Craig, Pete and me have got to keep the fun going on a few location shoots.

Beth Lowes was amazing and one-upped Bob Mortimer’s ‘Copydex’ with ‘eyelash glue’. We’re really grateful that she chose to use her Sunday to share Tom’s head as a craft project.

Also a huge thanks to Kings Sandwich Bar in Kings Heath. After recceing around town and scouring Google Maps, the only cafe that was closed on Sunday, happy to film, and had the world’s best mural of a full breakfast, was just a mile up the road. Thanks to Lucy from King’s for cameoing as the waitress too.

The film got it’s first showing at Bar Shorts in Shoreditch. By most accounts it got the best laughs of the night. Ian filmed this nice video of the reaction:

Here’s some GIFs. Everyone likes GIFs.