All Consuming Love (Man In A Cat)

A tiny man living inside a cat gets into a sticky love-triangle.

A tiny man who lives inside a cat becomes obsessed with the cat’s new owner. When the man finds out a woman his own size has been watching from afar he realises he doesn’t need to be alone anymore. Starring Kevin Eldon and Josie long.

Starting out as a half-complete student film, the tester trailer for All Consuming Love (Man In A Cat) was featured worldwide on YouTube, accumulating over 1,000,000 views, and generated a lot of support from other known animators, producers, as well being featured on Lineboil.com, run by Mondo Media’s Aaron Simpson.

A couple of years down the line, UK Film Council and Screen WM commissioned the film as part of the Digishorts scheme, where the story blossomed under the influence of the legendary script editor, Kate Leys.

The film’s story started from a little drawing I did of a frustrated man punching the inside of a hollow cat. I loved the idea because the logic was so disturbed and at the same time I felt sorry for the little man.

I wanted to make a film that was funny and strange, but also had sincere emotion to it. It’s as much about misunderstood loners as it is about poo jokes and falling over. The love story in this film brings the potentially creepy protagonist into a situation where normal people can actually sympathise with him.

The 2D frame by frame pencil drawn animation is geared toward creating nuanced character performances which were key to the personality of the film. Also, nearly everything in the design has a purpose, which brings a strange delicacy to the visual gags.

Here’s an attempt to revive some behind-the-scenes nuggets of Man In A Cat. I was too close to the film to be able to talk in any depth while making it. Afterwards, I spent my time trying to forget about it. So it’s nice now to get a bit of therapy and share some insight.

First of all we had to come up with an idea. This was my first proper short film so lots of research was done into what makes a successful short film. This started back in 2007. YouTube was only 2 years old, online short film distribution was still in it’s infancy, and I was still in the mind set of what I had grown up with – 30 minute TV shows and 90+ minute films. The nearest thing to shortform films that I had seen in abundance were sketches. It’s incredible to think now how inspiring short form films surround us. It’s still extremely hard to create a fantastic short film, but the inspiration and incentive is now out there in abundance.

At the start of the process we delved into my old sketchbooks for ideas. This image that I did when I was 16 stood out the most. It’s a man punching the inside of a hollow cat in frustration whilst a lightbulb hanging from inside burns his head. I love the unexplained history in that picture. How’d he get in there? Why’d he get in there? Why’s there a lightbulb inside a cat?! Best of all, the owner has had a potentially fatal accident and doesn’t realise that there’s a man inside his cat, and the man inside the cat is so wrapped up in his crappy situation that he hasn’t noticed that the guy responsible for feeding him is about to die. I wonder if Tony Lopes realised his Odd Streak strip was so deep.

So that was all great, but we had to turn it into a film that people would actually watch. As the sketchbooks below show, I spent a lot of time scribbling notes and visual gags and swallowing unfocused studenty bullshit from my dissertation tutor.

The problem with the whole ‘Man In A Cat’ idea is that it could go anywhere. The trick was to make ‘Yorkie’ actually likeable, while still making him a bit of a shit. The key was making him vulnerable. I still think about how his character could be pushed to be almost completely irredeemable – see Alan Partridge.

A turning point in the story was when I read A Matter of Death and Life by Andrey Kurkov. It’s about a man who can’t bring himself to commit suicide so hires a hitman. But he falls in love and has to escape being killed. I really like how the love story is a device in a outlandish situation rather than just being a ‘love story’. (Having only recently watched Michael Powell‘s and Emeric Pressburger‘s A Matter of life and Death, that also follows a very similar rule… It all links up now.)

The film was was started at University but never finished. To gauge a reaction and publicise the film I uploaded a tester trailer for the film to YouTube. Quite soon it was featured globally, gathering 100,000s of views and some very split reactions. This really helped us understand where the film was going and kept our faith in it.

Originally there was only one love interest, the big woman, Michelle, but she was just really a stooge in the story. When the film was picked up by Screen WM and UKFC, Ian and I went into script development with Kate Leys. That’s when an extra small person was added and the Susan love story flourished and became the heart of the film. Routing the crazy situation with a relatable love story gave the film its weird charm.

After that, the main difficulty about the story was balancing it between being weirdo comedy and serious-ish story telling. Our producer Jon Petrie was great for reminding us throughout that this was still a comedy. Festival films that are genuinely funny are very hard to come by and we can see why now. If Man In A Cat had a future as a TV show it would become all about the comedy with the character’s having a lot more time to develop.

Yorkie and his dynamic with the cat is obviously one of the most important things about the film. Everyone always asks, “Right, how does that work?”. The relationship between them is another reason why Yorkie needed a vulnerable side, otherwise he would seem just a bit too rapey.

Even for a short film, you have to fully form a character so that you can know how he’ll act. Even Yorkie’s name is designed (Yorkie =”Not for girls”, Pilgrim = ‘Wonderer’. Although I do like the names ‘Jim Cinnamon’ and ‘Belgium Sprint’). Amongst other ideas for Yorkie included him being the shame years of Super Mario and there being a touching moment where a doctor mistakingly allowing him to re-enter the cat as a bigger man.

Yorkie went through many permutations of the original sketch in order to get a balance between cute and grubby, which lead to this bug-eyed look that isn’t really my normal style.

Most of the cat’s mannerisms were based on my family’s dumpling-like cat. The biggest challenge for the cat was mainly architectural. A lot can happen in a space that doesn’t exist, so rules and limitations had to be worked out. How big should the inner ‘Tardis’ space should be? How many rooms should there be? What sorts of things would be in it? What is ‘Animal Interior Etiquette’ in ‘Little People World’? Surely there’s a better way out of the cat? Why is he in a cat? This was complicated further with the fact that Yorkie gets bigger when he’s outside. There was a reason why he grew once, but it stayed mainly because it created more of an obstacle for Yorkie, and because it’s cool.

The cat is just another room in the story, which is why she’s so gormless, but it still has an observed personality.

Michelle’s character anchor’s the other characters in the real world, which makes them seem even weirder. This was the main reason for part-rotoscoping the character (more on that in a later post). I wanted to separate Michelle from the ‘Little People’ and exaggerate the feeling that they don’t belong together. This was also done by keeping Michelle and Yorkie right and left of screen in most of their scenes together and breaking that rule for effect. The design and animation of the cat is a bridging of the styles as it’s the link between the two. 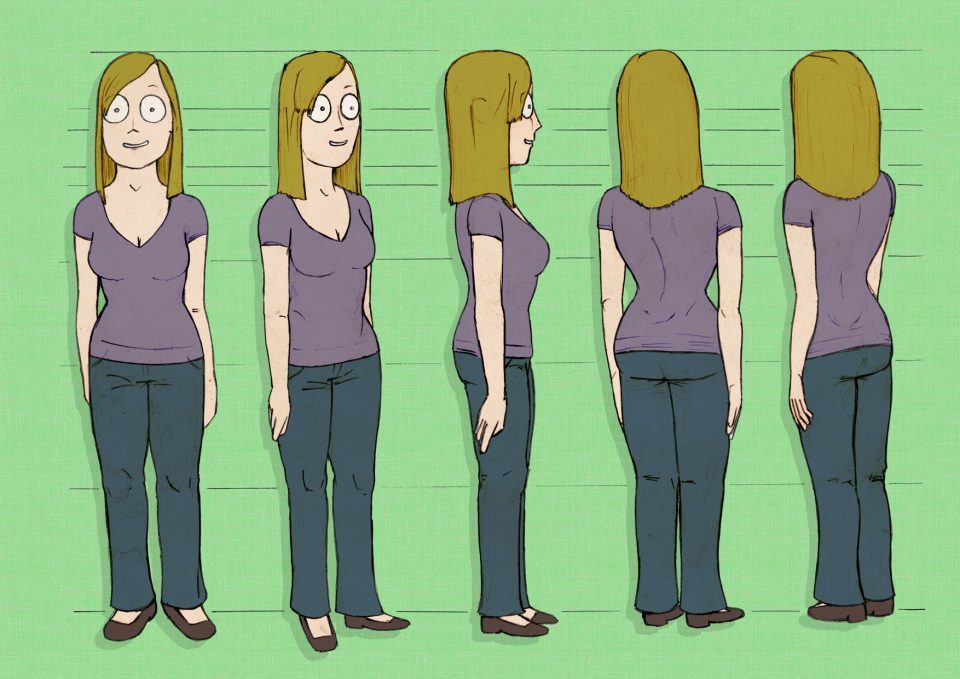 Susan Mildew was a late edition to the story, so creating her was more of a case of answering questions to what would complement Yorkie’s character and physical appearance. Susan was a combination of lots different people I’ve known, even down to her walk. It was only until we recorded the dialogue that I realised that Susan was the most honest character in the film. For me, Susan steals the film. If I had the chance to keep on writing for these characters Susan would have a chance to show she had some dogged strength underneath that down-troddeness, and the other characters would have a lot more honesty behind them. 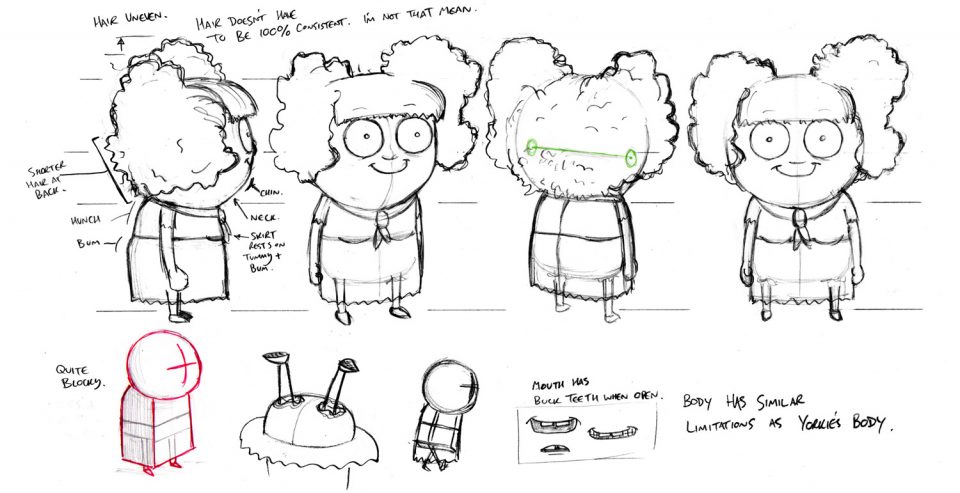 Throughout Susan’s development she was mousy in most ways. There were even ideas of her having an relationship with an overbearing mouse. The closest a mouse character came to came to materialising was the image of cartoon character ‘Ronald Mouse’ on an alarm clock. I also like the idea of Ronald Mouse’s stella career unraveling and him living in poverty. Another idea was that a mouse would be like the caravan equivalent to a cat’s insides.

Before being officially commissioned, we worked over three months answering any questions and concerns about the story with script re-writes and animatics.

With £12,000 funding and a ‘deadline’ of October we started the process of refining the scripts and animatic, working out logistics, offering talented animators insulting amounts of money, and casting. A tough twelve month learning curve ensued…